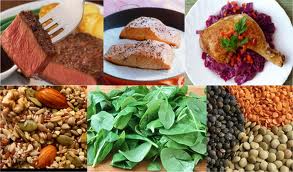 Iron is an essential mineral in all cells of the body.  It is however only needed in minute quantities and our bodies cleverly only absorb what is needed.  According to an article on the BBC Health website, men between the ages of 11 and 50 (and women over 50) need 8.7mg of iron per day and women between 11 and 50 need 14.8mg a day.  The amount of iron absorbed from food increases if the need is greater, such as during pregnancy, in adolescent girls, in people with anaemia and those who have suffered from heavy bleeding such as childbirth, surgery or heavy menstruation.

Iron forms a component of haemoglobin which is the oxygen carrying protein in red blood cells.  One of it’s major functions is to transport and distribute oxygen around the body. Iron is also involved in the conversion of blood sugar to energy. Metabolic energy is crucial for athletes as it allows muscles to work at their optimum during exercise and competition.

Iron absorption requires gastric acid (released by stomach lining) to convert it into a form that is easily absorbed.

Iron found in meat is much more easily absorbed by our bodies and is sometimes referred to as ‘haem iron’. Eating red meat and offal is the best way to prevent iron deficiency.

Iron present in non-meat sources, such as cereals and vegetables, is called ‘non-haem’ iron.  The best way to increase absorption of non haem/plant iron is to increase your dietary intake of vitamin C and avoid drinking caffeine at meal times.  This is also a good reason not to give young children tea or coffee as they need to be able to absorb iron to maximise physical and mental development.

Good sources of iron include: