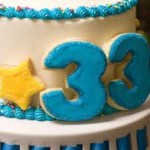 It was my 33rd birthday this week and ironically that same day there was a piece of research published by British social networking website “Friends Reunited” stating that 33 is the happiest year of our lives.

Apparently 70 per cent of people over 40 picked 33 as their happiest age.  One in three surveyed found their happiness in having children, while only one in five linked their sense of joy to their professional life.

Surprisingly 16% of the survey’s respondents were happiest in childhood, whilst only 6% said they were happiest in college.  More than half of those surveyed (53 per cent) said life was more fun and 42 per cent said they felt more optimistic about the future.

According to psychologist Donna Dawson “The age of 33 is enough time to have shaken off childhood naivete and the wild scheming of teenaged years without losing the energy and enthusiasm of youth.”

This all got me thinking about my happiest years.  I am not precious about age as to me it is just a number and doesn’t really matter. I have enjoyed elements of all life stages, the innocence of youth, the freedom of university and the excitement of travelling.  Obviously alongside this there was the insecurity of youth and pressures of establishing an identity associated with younger years.   I do however feel very happy in my 30s.  I am happily married with a beautiful baby girl, our own home, disposable income and a profession under my belt.   I feel comfortable and secure in my own skin.  I can see why 33 came out as the happiest age!