The recent BBC Horizon documentary “The Truth about Exercise” got me thinking about how I can increase my general level of activity on a daily basis.  I have always thought of myself as a relatively fit person, exercising about three times a week, usually at the gym or going for a run.  My main motivator has never particularly been body image but feeling good about myself and maintaining a degree of physical fitness.

However according to BBC Horizon, incorporating more NEAT activities into your day, also known as non-exercise activity thermogenesis, can help you to burn up to 300 calories per day.  Basically these are the calories burnt doing any activity other than structured exercise.  This must have a positive influence on your overall well-being?  The man behind the theory is Dr James Levine, from America’s world-renowned Mayo Clinic. He says that lengthy periods of sitting can cancel out the health benefits of regular exercise which basically means that going to the gym in the evening is not enough if you have been sedate for the rest of the day.

I found it concerning that Australian researchers who tracked nearly 9,000 men and women for six years found that those who sat and watched television for four or more hours daily had an 80 per cent higher risk of death from cardiovascular disease than those who watched fewer than two hours.  This is worrying seeing as though the average Briton sits for up to 12 hours a day in a society ruled by computers and televisions.

NEAT activities can include standing, walking, laughing, housework, washing the car, anything that does not involve sitting.  Simply standing burns 3 times more energy than sitting. 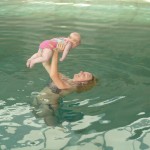 Savanna and I in the pool

Having watched this documentary and reflecting on my own daily routines, I have been making a conscious effort to walk anywhere locally rather than getting into the car.  Not that I watch lots of TV but I have been extra aware of not sitting for over half an hour without getting up and moving around.  I need to be a good role model to my daughter after all.  Extra trips to the park and swimming pool for us then!  I’d like to know how many NEAT calories I burn daily picking up the food she throws out of her highchair!