All of us face situations in life that are difficult to deal with. They can range from frustrations to life-changing heartbreak and everything in between. Getting through those situations makes demands on us. They tend not to happen when you have a lot of free time, so it’s not like they can be our sole focus. Much of the time we will see it as the worst possible time something could have happened.

We are taught at an early age to be resilient. Any number of sayings exist to make us look at bad news as a challenge we have to face. It’s character-building, and life is always darkest just before the dawn. It’s not how we deal with the easy situations that makes us the people we are. And while a lot of this is undoubtedly true, it can make us feel the pressure of tremendous expectation.

When the message is that dealing with these situations is what makes you a stronger person, it affects us. We can end up feeling that, even if the situation is causing us real difficulty, it would be wrong to tell people that. We don’t ask for help, because somehow that would be weak. We don’t tell people we’re struggling, because that means we’re failing. And that kind of pressure isn’t always positive.

Another old saying is “pressure makes diamonds“. This is an example of taking a scientific fact and trying to crowbar it into a point about personal growth. Yes, pressure makes diamonds. But if we move away from geology to meteorology, it can also cause fog. And being under large amounts of pressure can make it hard to see anything clearly. Is that a trite way of looking at it? Yes. That’s exactly the point. You can’t condense human suffering into a pithy calendar slogan.

When it comes to highly stressful situations in life, it is not weakness to need and look for help. It is not unfair to other people to let them know that you’re finding it hard. Knowing that there are people to whom you can speak is important in the long run. It’s not running away from your problems. It is trying to gain the clarity to deal with them in the most effective way. That way they don’t fester.

Divorce Or The Breakup Of A Relationship

When you’ve been married to someone – whether it is for a year or twenty – the collapse of that relationship is tough. Even if you aren’t married, a long term relationship involves a lot of sharing. That person becomes part of your life, decisions are made as a team. Everyday things are done with the other person in mind, and take on a shape different from if they’re done alone.

When that relationship comes to an end, even if you’ve grown apart it means a change (it’s summed up very well in this article: http://www.huffingtonpost.com/2013/06/30/life-after-divorce_n_3492327.html). Even if it’s acrimonious and you never want to see them again, it leaves a mark. If for no other reason than it means you have to change a routine, it means uncertainty and insecurity. You may have to find a new place to live, cope with the effects on children, no longer see people you considered friends.

To expect you to see this through alone is simply not fair. It is more than right to cry on a friend’s shoulder. It is worth looking to someone in a position of strength – be it a counsellor, a lawyer, a doctor – to find ways to lessen the demands on you. Without an outside perspective, you can get drawn into introspection and the whole thing gets dragged out.

An Accident And Injury To You Or A Loved One 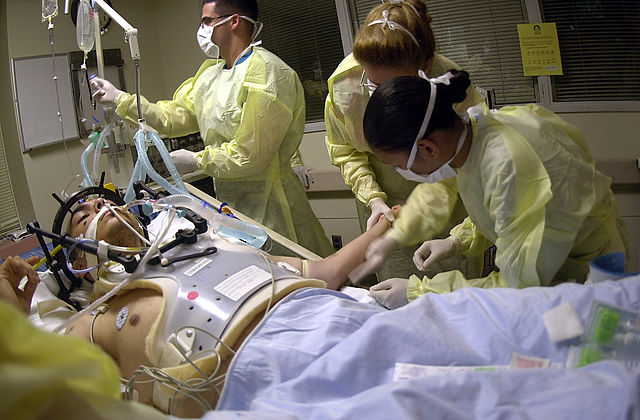 We’re all involved in accidents in life, ranging from a trip and fall to, in very unlucky circumstances, a car crash or other major incident. The kind of injury sustained can be basic, needing just a sit down or a sticking plaster. It can be considerably more extensive, including multiple fractures, blood loss or even unconsciousness. The more grave the accident is, the longer it will take to recover.

It doesn’t even need to be us involved in the accident for it to take a toll. A friend or family member getting hurt can be emotionally stressful for anyone. It’s particularly tough if there is a period during which you don’t know if they will live. Even when they pull through, the pain of living through that doubt can be long-lasting. You bargain with yourself on what you would do to make sure they survive.

And if it’s you who has been in the accident, the extent to which it impairs your quality of life can be considerable. Loss of earnings is just the beginning of it. Emotional distress, medical costs and the change it brings are all stressors.

These apply also in the case where a loved one has been put in hospital and does not have the ability to fight for themselves. Know your legal recourse in this situation. Good advice can be found from ukclaimlawyers.co.uk and other personal injury experts.

If the idea of claiming makes you a little uncomfortable, look at it on an altrustic level. Unfortunately, some companies only understand points being made when they suffer financially. By bringing a case, you don’t just get justice for yourself. You also have a chance to change the way that things are done and ensure that no other person has to suffer as you have.

To reinforce this, you can request that part of your settlement has certain agreed conditions. You can use these ensure the circumstances you found yourself in are no longer possible. Financial penalties for not making these changes is one way of ensuring they are obeyed.

Losing Your Job Through No Fault Of Your Own

We don’t expect, these days, to be in the same job for life. If you happen to be in a vocation, like teaching or medicine, maybe. But even then you may move between schools, hospitals, wards or towns. Whatever the job you are doing, though, you expect to have some measure of security. However, people lose their jobs too often for reasons beyond their control.

Sometimes it’s unavoidable and plain bad luck. If the company goes under and jobs can’t be saved, hopefully there is at least a redundancy package. But sometimes, a job is lost because you take the fall for someone else’s mistake. You may be unfairly dismissed, given a convenient reason but know the real reason. This happens to people who are open about illness, who are pregnant or who have a difference of opinion with a higher-up.

There is often legal recourse in this situation, and it really pays to read your contract when your employment starts. Sometimes, even if the reason for your dismissal is within the terms of the contract, you may still have a case. The most important thing to remember is that the company have to have been working within the contract also. If you have been denied advice, guidance or rights, then you have a reason to submit a claim.

If another person – be it a boss or colleague – is directly responsible for your unemployment, then mediation can help. We all disagree with people sometimes, and some people can let this fester to the point they try to have people fired. Sometimes, that works. You can offer to enter mediation and agree to probation in your job. This may be a case of delaying the inevitable, but it’s better than just accepting your fate.

Illness is something that nobody wishes to talk about. We expect to be healthy, and we struggle to have a cohesive plan for what would happen if we did fall ill.

One of the best ways to protect yourself from the financial fall out is with insurance. If you know that financial matters are being handled, then it is easier to focus on recovery. You don’t want to be worrying about counting pennies when you’re going through a course of treatment. While there are government schemes to support those who are unwell, they will not come close to your salary scheme.

You should also speak with any doctor that may be handling your treatment. They will be able to give you some clarity on when, and whether, you may be able to return to your previous level of work. They will be able to point you to resources that may allow you to take time off without suffering financially. They can also advise you on adaptations you can make to keep doing your job, or find another.

The other option is to self-insure. Set up a savings account that you don’t have direct access to, and put a percentage of your wages into it. Use this to cover costs in case of illness. This has the added benefit of the money always being available to you for any purpose, not just through ill health.

More important, in the case of illness and in any case where you are going down a stressful road, is to speak to family and friends. So many people, pushed by stress to the point of breakdown, finally unburden themselves. Friends and family alike say “I had no idea it was this bad”, and it’s usually true. Being stoical in the face of stress can see you put on too brave a face.

The bottom line is that it may seem tempting to soldier on and not rock any boats, but it isn’t the way to deal with things. Eventually the cracks will begin to show, and then you can’t help but burden people.